The Election Commission of India is preparing to pitch for the mandatory, legally backed, linking of voter IDs with the Aadhaar number, ET has learnt.

The commission will propose amendments to the Representation of the People Act, 1951, that will require citizens to link their Electoral Photo ID Card (EPIC) with the 12-digit Aadhaar, while ensuring privacy protection, said people with knowledge of the matter. The move is aimed at improving the accuracy of the electoral rolls, they said, adding that the commission will be sending its suggestion to the law ministry shortly.

This marks a shift in the position of the commission, which had embarked on voluntary Aadhaar linking in 2015 until court cases stalled the process over privacy concerns. By that time it had covered nearly 380 million voters. India currently has more than 750 million registered voters.

The move follows the Supreme Court’s September 26 verdict that restricts Aadhaar linkage to certain services and that too only if these have legal backing. The commission had then sought the advice of the Unique Identification Authority of India (UIDAI), which administers Aadhaar, on the applicability of the court order to the commission’s plan to resume linking on a voluntary basis.

UIDAI suggested an interim measure to allow this in a limited fashion but said that full-fledged linkage needs legal backing, ET has learnt. Having considered the UIDAI advice, the panel decided that it was best to seek a permanent solution as it considers this the best tool for weeding out duplication and misrepresentation in electoral rolls. It had filed an application in the Supreme Court in 2017 to continue with Aadhaar linkage in the larger public interest. Considering that political parties have been vociferous with their concerns about the accuracy of voter lists in poll-bound states, the Election Commission feels that Aadhaar linkage will comprehensively address such complaints and establish greater credibility for electoral rolls. 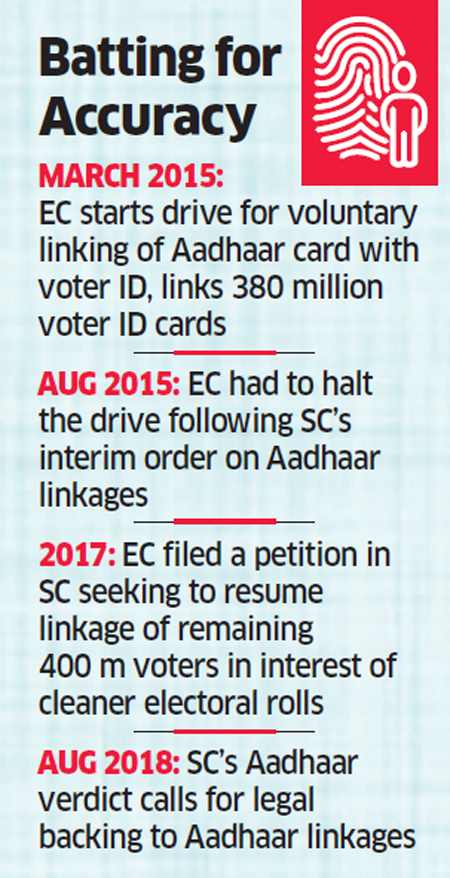 The commission feels it’s on strong ground as almost all parties supported the idea of Aadhaar linkage at a meeting in August. Aadhaar linkage and voter authentication are also considered critical to the commission’s plans to implement advanced mechanisms such as electronic and internet-based voting. It will also be necessary for giving ‘remote’ voting rights to domestic migrants.

The idea of proxy voting will also need Aadhaar backing for voter verification. The government has already passed an amendment in the Lok Sabha to allow NRIs to participate in elections via proxies. While the legislation will need Rajya Sabha approval to become law, Aadhaar linkage is considered necessary element of such a plan. The commission had also discussed the issue of voting rights for domestic migrants at the same meeting and cited a 2015 committee recommendation that advocated Aadhaar linkage for developing portability “since Aadhaar is associated with a specific residential location”. This is learnt to have found political support as well.

UIDAI allows you to lock your Aadhaar biometrics for security, here’s how to do it

Debit, credit card holders beware! Your cards may get blocked if you fail to do this by December 31

How to Transfer Amazon Pay Balance into Bank Account

SBI Customers Alert! Do you have a debit card? Your bank set to make it invalid; rush, you must do this

NPS and Tax: Deduction on Contribution and Exemption on Withdrawal

Now, You Can Carry Your Vehicle Documents On Your Phone

Banks may block your debit, credit cards if you fail to get EMV chip cards – Here’re the details

How to check bank balance without internet in phone?

How To Reactivate A Discontinued PPF Account? By Olga Robert

SBI can open Zero balance account without KYC, just have to do so much work

How will we know if our email been stolen “?

Is it only for vehicle owners in Deli ?

Last 34 years I am driving without any rule breaking, but last week while driving my car I had to give lift to one for urgent medical treatment. for this I jumped a signal in between to reach hospital. for that I got a sms for penalty. I was ready to pay the penalty but the officer on duty frightened me to put to jail and showed me notice. to come out of this he asked me Rs. 2000.00 or otherwise i will be jailed immediately even though I was ready to pay penalty. Secondly even I told him to come with me to hospital to confirm. In this all system all rights are given to officers which they are misusing.

PodguzovRJ - Is there an error in your Aadhaar ? Here is how to correct it online, using OTP and other methods