There is a good news for EPF subscribers. Now, if they are unemployed for more than 1 month, they can withdraw 75% of their employees’ provident fund i.e. an EPF account. The Labor and Employment Ministry has issued notification in this regard on December 6. For this, the amendment to the provisions of the Insurance Provident Fund (EPF) scheme has been amended.

The announcement made in June this year
will tell you that after one month, 75% of the withdrawal of EPF account was done by the government in June this year. However, the notification was not released at the time. This proposal was approved in the meeting of the EPFO ​​Central Board of Trustees (CBT).

What has been said in the notification? 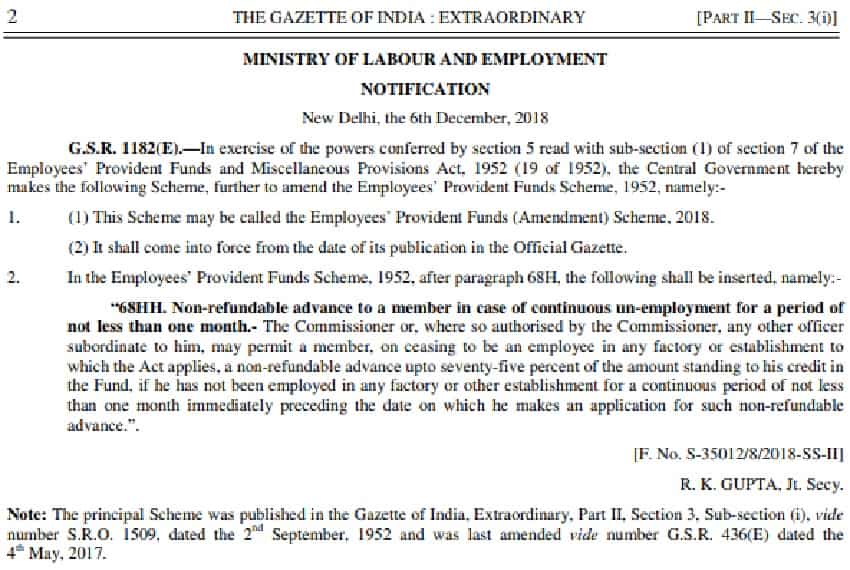 According to the notification of Ministry of Labor and Employment, if any employed person who misses his job or leaves a job and remains unemployed for more than 1 month, then he can withdraw maximum 75% from his EPF account. According to the rule, the amount withdrawn from the EPF will not have to be returned to him.

According to the notification, if a person is unemployed for more than one month after leaving or leaving the job, then he can withdraw maximum 75 percent of his EPF. Under the earlier EPF scheme 1952, there was no facility of partial withdrawal in case of unemployment. After leaving the job, the person could only do the final settlement.

UIDAI allows you to lock your Aadhaar biometrics for security, here’s how to do it

Debit, credit card holders beware! Your cards may get blocked if you fail to do this by December 31

How to Transfer Amazon Pay Balance into Bank Account

SBI Customers Alert! Do you have a debit card? Your bank set to make it invalid; rush, you must do this

NPS and Tax: Deduction on Contribution and Exemption on Withdrawal

Now, You Can Carry Your Vehicle Documents On Your Phone

Banks may block your debit, credit cards if you fail to get EMV chip cards – Here’re the details

How to check bank balance without internet in phone?

How To Reactivate A Discontinued PPF Account? By Olga Robert

SBI can open Zero balance account without KYC, just have to do so much work

How will we know if our email been stolen “?

Is it only for vehicle owners in Deli ?

Last 34 years I am driving without any rule breaking, but last week while driving my car I had to give lift to one for urgent medical treatment. for this I jumped a signal in between to reach hospital. for that I got a sms for penalty. I was ready to pay the penalty but the officer on duty frightened me to put to jail and showed me notice. to come out of this he asked me Rs. 2000.00 or otherwise i will be jailed immediately even though I was ready to pay penalty. Secondly even I told him to come with me to hospital to confirm. In this all system all rights are given to officers which they are misusing.

PodguzovRJ - Is there an error in your Aadhaar ? Here is how to correct it online, using OTP and other methods